Dark Horses filmmaker Rob Sanderson, whose wife works for the NHS, creates emotional fundraising film at home starring his own family, promoting the NHS Charities Cup, with post support from the UNIT team. 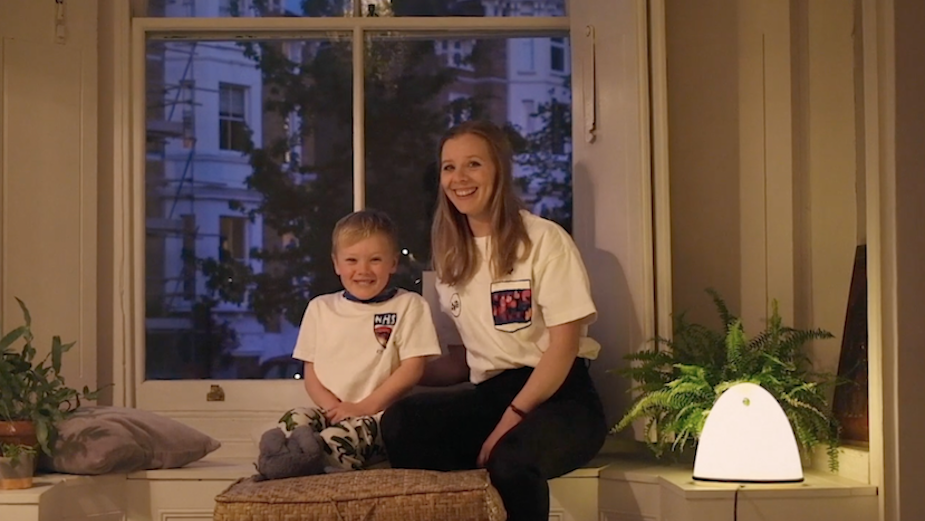 In the next stage of its campaign to promote the NHS Charities Cup (the star-studded FIFA tournament created to raise money for the NHS), Dark Horses filmmaker Rob Sanderson created a beautiful and emotional fundraising film.

Shot entirely in his own home following lockdown guidelines, the film was directed and DOP’d by Rob and stars his son Fin and wife Holly, who works for the NHS.

Backed by a moving song, the film shows Holly putting on her cycling gear and heading out to work. While she is at her shift, Fin spends the day creating football shirts to wear together while watching the tournament. It ends with him presenting her the shirt as she gets home, before hugging her. It then shows the audience that they can donate £5 by texting UNITE5 to 7045 or £10 by texting UNITE10 to 70456.

The UNIT Studios team lead by Executive Producer Ian Luxford were proud to support Rob and the rest of the team at Dark Horses by carrying out all post production remotely to help bring the spot to life. Our Creative Director of Colour Denny Cooper carried out the grade to create a naturalistic day to night light. Whilst Ian Baker lead all 2D.

Dark Horses Rob Sanderson says: “Our morning routine is Holly cycling to work at the crack of dawn and Fin getting up to see her off. Then we usually start the homeschooling schedule. This time, though, we made shirts and waited for it to get dark. We really liked the idea of putting all the energy people would usually spend supporting their football teams, into supporting the NHS. This inevitably means that you’ll need a shirt, and with the kids at home and the population rediscovering their handicraft skills, making your own seemed to be a great way to support the cup.”

The NHS Charities Together Cup, an ambitious FIFA tournament between a star-studded line-up of household names to raise funds for the NHS Charities Together Covid-19 Urgent Appeal. Sporting superstars who have signed up include John Terry, Ben Stokes, Dillian Whyte, Tony Bellew, Leah Williamson and Jonny Brownlee, who will take on the likes of showbiz favourites Chris and Kem and a host of other celebrities.

Created and backed by a collective of brands (Lynx and BP), media companies (Reach PLC) and broadcasters (ITV) the tournament is a knockout FIFA ‘20 competition featuring eight teams, each comprising three celebs, with a public vote deciding which member represents them in a live-streamed one-on-one match. The first match took place on Monday 27th April. All matches will be streamed live online and on social media channels, here and by Reach PLC outlets including the Mirror, Express and Star newspapers, with captain interviews, build-up, results and highlights also available at the official website.

All proceeds go to the NHS Charities Together: Covid-19 Urgent Appeal which funds NHS charities around the country to support our heroic but desperately stretched NHS staff. Donations will be raised via donate buttons on games, highlights and news, direct calls to action from celebrity participants, and interactive in-game features. The initial aim is to raise £10 million, with none of the celebrities involved taking a fee.