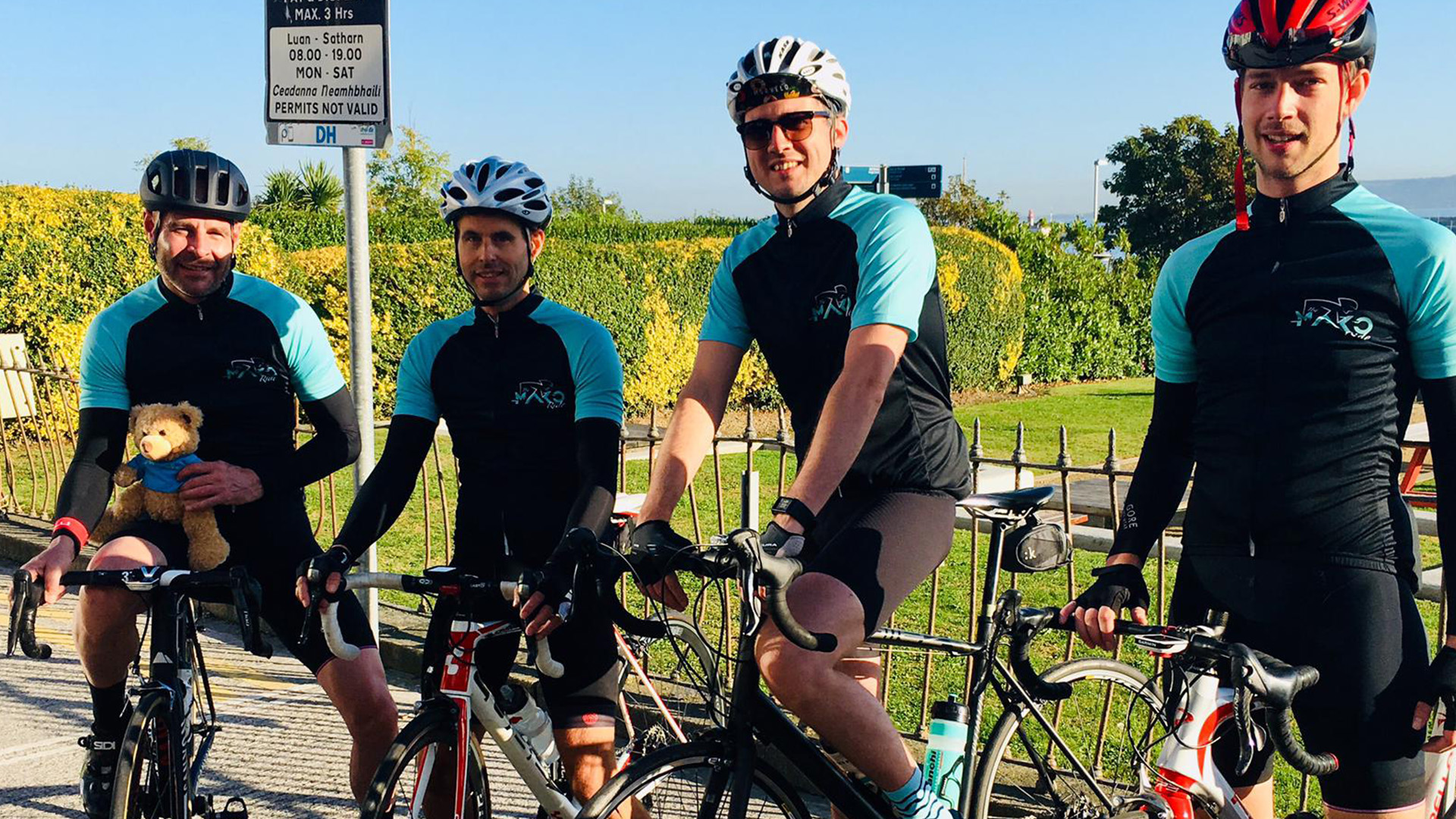 This year sees the launch of what is to become the annual UNIT MAKO x Kinsale Sharks charity bike ride.

Supported by Sharks International Creative Festival, The MAKO RIDE is a bike ride from Dublin to Kinsale in aid of ORBIS Ireland, to raise money and awareness in the fight against preventable blindness.

ORBIS is an international non-profit that brings their network of partners together to mentor, train and inspire local teams to fight blindness in their own communities. The charity looks to work with their incredible Flying Eye Hospital, through their online mentoring platform, Cybersight, and through their long-term country programmes. It also runs thanks to the generosity of the volunteer ophthalmologists, anaesthetists, nurses and biomedical engineers who give up their free time every year to train eye teams in communities around the world.

All the riders have been training for the last 6 months building up to this week. And this is a particularly special voyage as the peloton set off scouting the route and accommodation (and possibly some guinness along the way), before opening up the ride to fellow industry riders in 2020 and beyond so as to become a fundraising force.

The bike ride kicks off this week, with goodbye drinks at UNIT Studios on Tues 17th Sept before seeing the riders commence from Dublin on Wed 18th Sept and finish on Fri 20th Sept in time to arrive at the Sharks Festival HQ (at the Acton Hotel), before heading on to The Spaniards Inn.

Various charity fundraisers have already taken place in pursuit of raising as much money and awareness as possible for ORBIS including a charity poker night and charity speed bike at Unit Studios – but more donations are welcomed on Just Giving.

The guys look forward to seeing some of their Soho friends and UNIT colleagues support throughout the ride on social here but also to be cheering on the riders to the finishing line at the Sharks HQ and seeing everyone at The Spaniard Inn as the peloton rides in on Friday afternoon from 3.30pm.

UNIT Partner Amanda Luckwell comments: “At UNIT we are passionate about supporting ORBIS as it is an important charity for the company. Aligning with the Kinsale Sharks is a great opportunity to be part of one of the key creative festivals of the industry calendar and combining many of our teams passion for cycling whilst also raising money for ORBIS felt like such a great opportunity, We look forward to this becoming a much bigger industry wide ride next year as we open it up to lots of our key clients and collaborators. But in the meantime let’s all toast this year’s intrepid riders as they arrive at The Spaniard Inn this Friday!”

UNIT Creative Director of Colour & MAKO rider Denny Cooper (@denzilcooper_colour) comments: “Proud northener, keen fair weather cyclist. I’ve never had the opportunity to go to Kinsale and always wanted to, so I jumped at the chance to cycle there to see the awards and raise money and awareness for such a worthwhile cause and of course to help those less fortunate, for something a lot of people take for granted.”

UNIT Producer Jake Saunders adds: “As a relatively new cyclist I’m really looking forward to the challenge, not to mention for such a great cause. This will be my first attempt at such a long haul trip so really hoping I’ll manage! As we are in the VFX industry healthy eyesight is something we rely on and take for granted so the tie in with ORBIS is really great. “

UNIT VFX Artist Milo Paterson; “I’m on my bike daily as it’s my mode of transport for my commute to work. For me cycling is the perfect way to explore and it keeps me active so when I was offered the chance to cycle to Kinsale I jumped at the opportunity. Helping to raise money for an incredibly worthy cause such as ORBIS is a huge motivation for me and the rest of the team #vfxforvision.”

UNIT VFX Artist Alec Eves; “The chance to ride in Ireland, where I’ve never been, and to raise money for a great charity like ORBIS was not to be missed. Working in a visual job I can thankfully only imagine the suffering of people with sight problems. The work ORBIS do to help is fantastic and a great reason to be involved in the ride.”

Big thanks to supporters Kinsale Sharks, APA and ORBIS. Follow the riders on @themakoride and on @unit_studios!