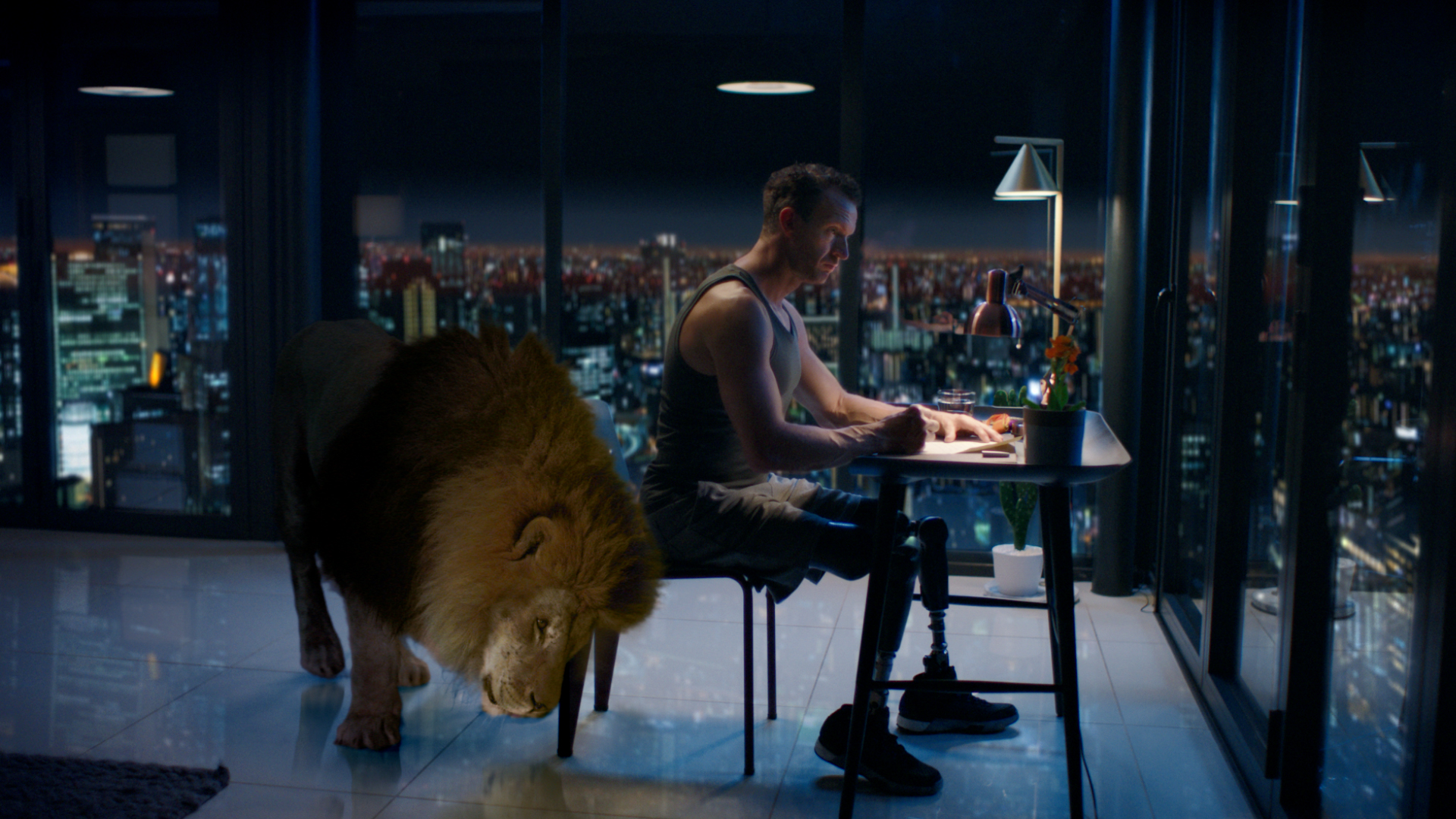 Entitled ‘Lionheart’ after the athlete’s nickname, the film features a lion accompanied by a heart-felt tribute to his deceased friend Simon Mellows.

Here at UNIT, we were involved in the early stages of the production.  We suggested sourcing stock footage of lions and creating the treatment/storyboard around the available action. Without any lens information for the Lions, it was a collaboration between director Stewart Sugg, DOP Stuart Luck and UNIT’s VFX Supervisor on set to make sure the camera angles and focal lengths matched the lion plates as accurately as possible to give us the best chance to composite the lions into the live action successfully.

A matte paint of the external environment was also composited into the external windows to give the impression we were in a city apartment. This was then reflected in the floors and apartment environment.

We graded the lions, added reflections and contact shadows to bed them in the scene.
UNIT’s Head of Colour Grading Scott Harris comments, “I loved working with Stu, he always creates very emotive shots for these films and BP Lionheart is no different. We needed to create a ‘late night’ city apartment feel, without letting it slip into an ominous type world. Stu and the 2D team at UNIT did an amazing job of finding the right balance, which made it a dream to grade.”

With full production delivered by PSONA Films, Producer Thomas Boden notes, “It’s hugely exciting to be back working on BP’s Energy Within Campaign. Building on last year’s campaign, this year is all about exploring the very moment that the athletes have their Energy within ignited.  In ‘Lionheart’, we worked with UNIT to create a Lion that embodies Richard Whitehead’s courage and determination and that also pays homage to his late friend and mentor. Originally intended for online use only, the client liked the film so much that it has now been aired on Channel 4 during the World Para Athletics Championships that are currently taking place in London. It was a huge success and a fantastic film to kick off the new campaign. It’s a dream to work on projects like these with dedicated specialists and awesome creatives.”

Charged with bringing the lion to life, UNIT’s Flame Artist Rob Ellis explains, “The fun challenge of Lionheart was to convincingly combine Richard Whitehead with a lion in a dramatic city environment. Tito’s onset supervision ensured the camera positions and focus were sympathetic to our footage. Once in Flame the twinkling city plates brought life to the stunning wide shots and intimate close-ups. Relighting the lion, adding his reflections and shadows aided the interaction of the carefully chosen clips. Finally the flickering memories of past sporting achievements were ‘projected’ onto the glass before the lion’s gaze. A final DCP with Scott Harris achieved the magic we were looking for. Stu (Director) was a dream client – his feedback was always concise, thorough and really pushed the project forward to a creative level I’m really proud of”. Full VFX Breakdown of the film detailed below.

UNIT’s Chris Southwell finishes, “Another great BP film to have the pleasure to Sound Design with all the creative elements working together to deliver a dramatic/epic film”.